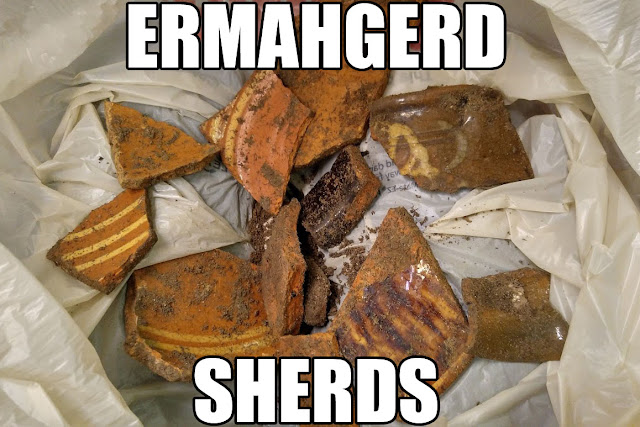 He also took a closer look than I did at the walls of one of the rear construction pits, and recognized that a vertical line of bricks going down about six feet indicated the presence of a privy (in the lingo of my native land: a dunny) which could possibly date back to the very first construction on the property in 1740. Privies are rich sources of archaeological artifacts, being receptacles of not only what the archaeologists sometimes adorably term "night soil," but also household trash.

We resolved to return on Thursday night, after the construction workers had knocked off for the day, to see what else we might find.


See album on Flickr: Digging for artifacts at the Hannah Callowhill Stage

We found so much stuff, we went back on Saturday and found some more of it. And in between, and since Saturday, I spent every waking hour (and some of the hours I should have been sleeping) obsessively washing and sorting and matching and assembling and gluing. This was such a joy! I was one of those kids whose dad was always yelling "Don't touch that!" because I wanted to feel every cool thing in the world. I've been trained well to refrain from touching objects at museums, but that hasn't meant the desire has gone away. Finally, my grabby little fingers could handle the forbidden fruit as much as they wanted, because it was mine, I found it, on my property. Also, I'm pretty good at jigsaw puzzles, but I always found them pointless. Now at last I had multiple jigsaw puzzles with a purpose.

If I believed wholeheartedly in fate, it would seem very fateful that Matt and I bought this property and spearheaded this construction and were on hand to rescue these objects. Remember that time we went to Egypt and geeked out on the archaeology there (and also found some very human looking bones in the sand at Saqqara)? Or that time we went on a dinosaur dig and found an allosaurus skull? This latest chapter seems extremely right.

I have learned a nightsoil-ton about mid-18th to mid-19th Century rubbish in the last few days while waiting for epoxy to set: a crash course in redware, slipware, creamware, stoneware, porcelain, and glassware, with some information on bones, pipes, and shoe leather thrown in. Here's an example of the reading I've been doing while taking breaks to use the modern equivalent of the privy. I also learned that Colonial people ate a LOTTTTTT of oysters and dumped all the shells in the toilet or used them as fill, and also that oyster shells look identical to pieces of pottery when jumbled up in a pile of 200-year-old night soil, and god I really hate oyster shells now.

Below is a slideshow of the end results of our work: photos of each of our finds. If you click through to the actual album on Flickr, I have tried to identify them and include links to information I've read in the titles and descriptions. If you have any further information to contribute about any of the items we found, we'd love to hear it in the Flickr comments:


See album on Flickr: Artifacts from the Hannah Callowhill Stage 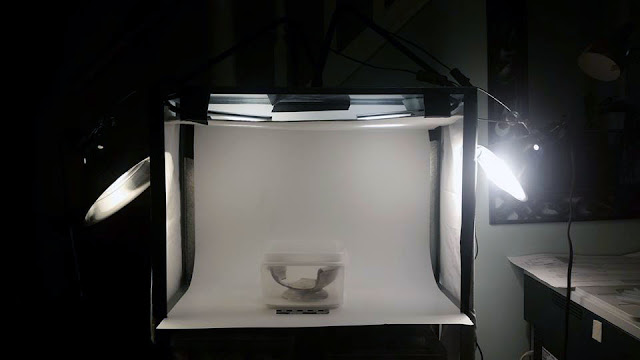 Posted by Mormolyke at 9:38 PM