Front and Callowhill Streets, in pictures 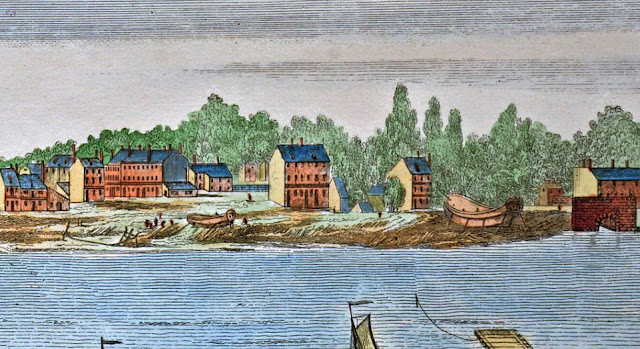 Over the last few years, as we dug into the history of the property we accidentally bought, I was really taken by all the uses it had, and the shapes it took, but became rather frustrated at trying to find any photographs of 103 Callowhill Street. As evidenced by the last couple of stories, by the mid 19th century, the neighborhood got pretty rough, and by the mid-20th century, the powers that be famously decided to bulldoze their troubles away, halting the eastward demolition precisely at the side of our building. Even after that, the "River's Edge" neighborhood had a roughness to it - stories about homeless folks setting fires in vacant buildings right up into the 21st century. By that measure, it's not terribly surprising that finding photographs of the building in its various states proved difficult. Christ Church in Old City has been illustrated from various angles for about as long as it's been built, but the working class fabric of the city barely captured any attention from artists and photographers, and of those that did preserve visual record of what was at the time mundane, few had their works survive into the modern era.
But when you're living in Downingtown waiting for construction on your home in Philly to start, sometimes the best way to relax after a long day of work by burying yourself in research. Since March of 2015, I've been going back to a number of online resources and poring over them for glimpses of what the front of this building looked like. I have a folder in my Dropbox full of related images, and what good is that folder if no one else can see it?