It's been four months since we bought 103 Callowhill Street, aka the Hannah Callowhill Stage, and I haven't blogged too much about it, because so much has happened, but there's isn't a whole lot to physically show for it yet. I keep getting asked for updates on the proceedings, however, so here they are, all the boring details I can stand to type.


In the weeks following the purchase, most of our energy was spent trying to stem the steady damaging flow of precipitation leaking into the building via the decrepit second-floor roof. As I mentioned in the first post about the Hannah, the second-floor efficiency apartment and much of the theater lobby was in a terrible state. The next-door neighbor, who owns a scaffolding company, told us that the roof has leaked for at least the last three years, but nothing was ever done about it. Said neighbor, being a neighborly guy, had even once offered to help repair the roof free of charge if the building's previous owner bought the necessary materials—about 88 bucks worth of flat roof rubber—but previous owner inexplicably never took him up on the offer and instead let the weather do its inevitable damage, so that now the roof decking and sheathing beneath the rubber is completely rotten.
Previous owner has a proven track record of making pretty poor decisions, though.

We didn't want to waste materials and money putting on a completely new roof because our plan is to rip off the roof shortly and build a third floor. So began some experiments in temporary fixes, beginning with me clambering up there in sub-freezing temperatures with some roof cement.


As it turns out, the roof is just too fucked, and this patch job, valiant as it may have been, didn't work so well, because too much of the roof is porous now, and the drainage slope was so poorly done that water collects in pools all over the place. We currently manage, rather than stem, the flow with draped tarps both on top of the roof and indoors to catch any stray leakage; after every rainstorm, we go to the property to pump water out of the collected pools and empty collection buckets. We just did it yesterday afternoon, in fact, after a thunderstorm which also managed to rip some of the tarp from its moorings. It's annoying, to say the least, and we're still weighing whether this temporary fix is worth it or if it will be better to put on a cheap new roof which we will immediately rip off again when construction begins.

But back to February. Inside the building, the leaking had already flooded many areas, and because (a) the heating system is an incredibly stupid and inefficient heat pump and (b) the electricity had been shut off for months, all the collected water had frozen, and the plumbing had burst in several places; in fact, the water meter itself was cracked in half by ice. I chipped a half-inch of sheet ice off any surface capable of collecting water, ripped up all the destroyed carpet and tile (N.B. I'm convinced Hardiebacker is useless in wet applications. I think regular cementboard would have survived, but the Hardiebacker installed under the tile by the previous owner turned into mushy cardboard, and most of the tiles were cracked), demolished a lot of waterlogged drywall including the entire second-floor ceiling, and repaired the plumbing.

This tub is full of ice I chipped off the kitchen floor. It was like a dirty skating rink.
A photo posted by Melissa Dunphy (@mormolyke) on Feb 13, 2015 at 7:45am PST


On February 15, while I was twiddling my thumbs and staring at the green room ceiling during The Cherry Orchard, I had a flash of inspiration and hastily sketched my idea so I could photograph it and send it to Matt:
The idea was to raise the ceiling of the performance space to the height of the second floor roof, giving us a lot more headspace in the theater. By doing this, we'd be able to hang a lighting grid above the stage, create a mezzanine area in the house, keep the efficiency and rent it out or use it for artist housing, and build a new single-level primary residence on the third floor (code stipulates that newly constructed storeys can only take up 70% of the area of the entire lot, so the third floor only extends back 70 feet from the street, for a total square footage of about 1100 square feet).

I was super excited about this plan because it seemed to solve so many problems, and ran squealing to our architect the next day, hoping it made sense. To my delight, he liked the idea immensely, and he and his team set to work refining it, tweaking it to pass code restrictions, turning the efficiency into a one-bedroom with a small patio located above the theater's restrooms, and developing the floor plan for our apartment, which will include a light well. 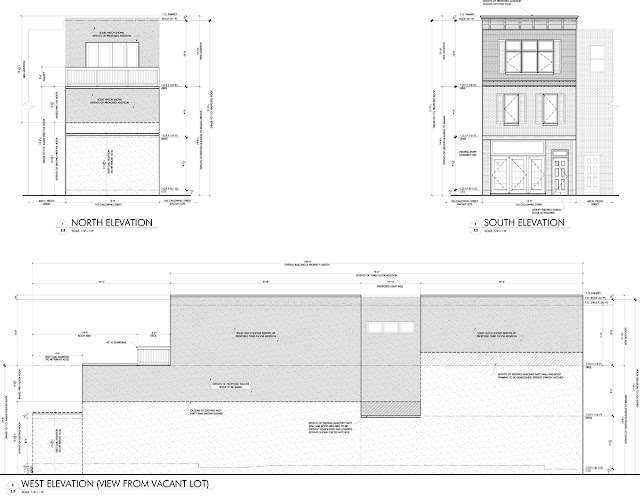 Matt used these drawings to create some pretty intense SketchUp files to give us an idea of what the end result will look like. From his notes: "I based the neighborhood off a combination of Google maps imagery, plans for 412 Luxe that were on OCFrealty, and plans for Renaissance Plaza on Alesker & Dundon's site. And here are a few detail shots from inside the model. The only one I really laid out in detail was my study, since I already had all the models from when I'd first designed it, and I'm happy to report it all fit. The rest of it's just kind of throwing in some basic placeholder stuff."

Matt went even further and created animated shade studies for January and June, to help us decide if we wanted skylights or not.

So ... that's the cool part. The somewhat less cool part is figuring out how we're going to pay for all this. This planning stage, which includes hiring structural engineers and drawing up construction documents, has cost us about $30,000 alone. For the construction, we'll need more than $250,000 in the bank

So where will the money come from? Well, the structural engineering part of our bill so far was covered via an unusual source. I competed on a TV game show and won over $6,000. In a bizarre coincidental twist, one of the contestants I beat is a professional magician. Yeah.

My life is a fucking fever dream.

(That last link also includes approximately one second of footage of my appearance, which is all you will ever see.)

I'm lucky that I've also gotten a decent amount of non-gameshow-related paid work in the first half of this year, because practically every paycheck Matt has received since February has been immediately signed over to our architects. Meanwhile, we have been trying to get a loan for $250,000 for the construction, but this has proven difficult. Because we had to pay for 103 Callowhill Street with cash after our 203K mortgage fell through (thanks to multiple cock-ups by the lender), our credit ratings took a major hit as we maxed out our lines of credit. And after a lengthy application process last month involving way too many credit pulls, Well Fargo told us they were too conservative to play ball on a $250,000 loan, which pissed me off a great deal. A major factor in their reluctance was the $90,000 mortgage we owe on the house we live in; getting another large loan would tip our debt-to-income ratio over the edge of respectability, according to them.

Around this time, the lovely long-term tenant in our first house in Downingtown sent us an e-mail out of the blue; she had found true love and was getting married and moving out in June. My first thought was that I was super happy for her! My second thought was panic about finding a new tenant. My third thought, after thinking a while, was: AHA, THIS IS FATE. The universe was telling us what to do. Suddenly we could sell our current house and have somewhere to live, rent and mortgage free. (We own our Downingtown house outright because it only cost $80,000.) Selling our current residence would get rid of the mortgage, and leave us around $85,000 in the black. Then we'd only need to borrow around $165,000 for construction. Surely that amount would be doable, especially since our credit ratings are already bouncing back.

Once this plan was settled, we went into overdrive preparing our current residence for sale. I spent a few days researching the ludicrous art of house staging, then we set to work making our house bland, but not too bland. I finished the yard landscaping, fixed all the things that I'd been putting off for years, cleaned all the things I never bothered cleaning, patched, painted, primped, and generally attacked the problem like it was my job, which really, it was. Then we rented a wide-angle lens and took a bunch of terrific photos.

Blog exclusive! This is the first time anyone has seen these photos, because before we could even post them anywhere or create any kind of MLS listing, a couple we know offered to buy our house! Part of me is like: ayfkm, all that staging work for nothing. But having friends take this problem off our hands in a private sale is infinitely preferable. Even if these photos are good for nothing but showing off here. 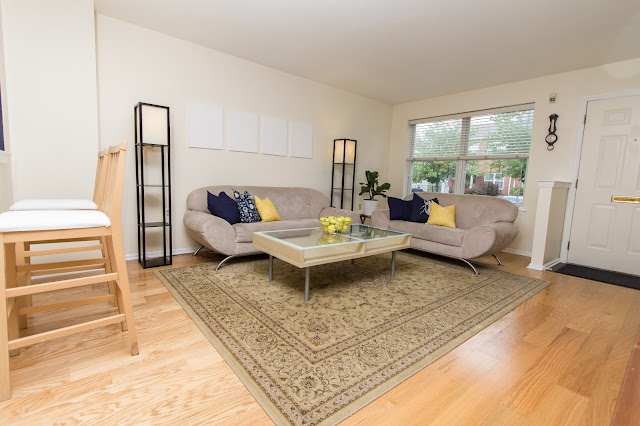 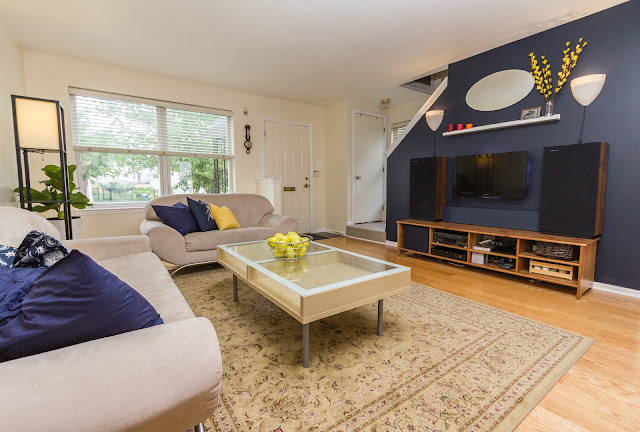 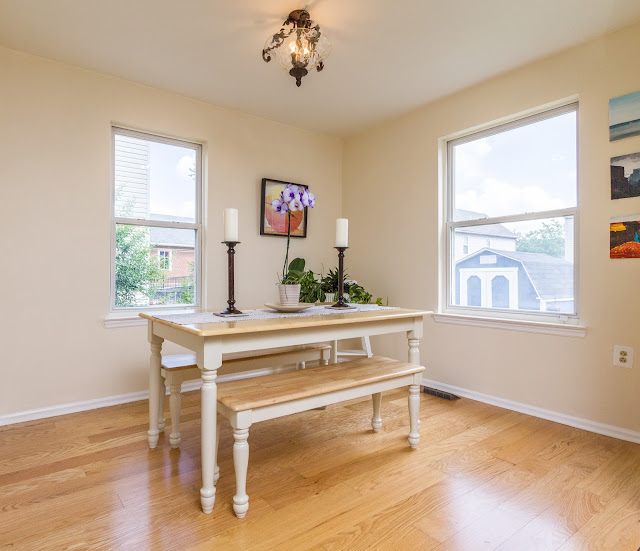 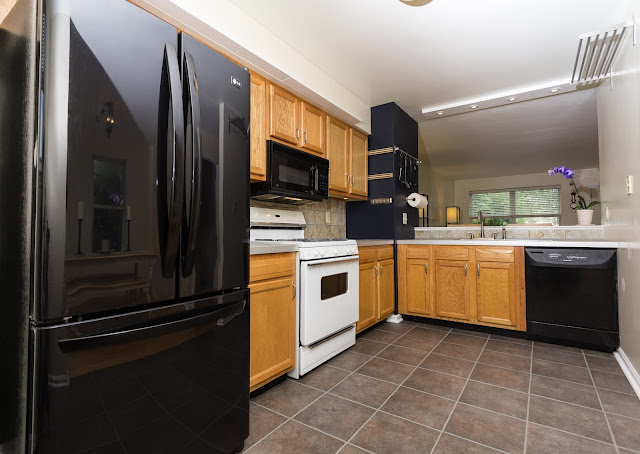 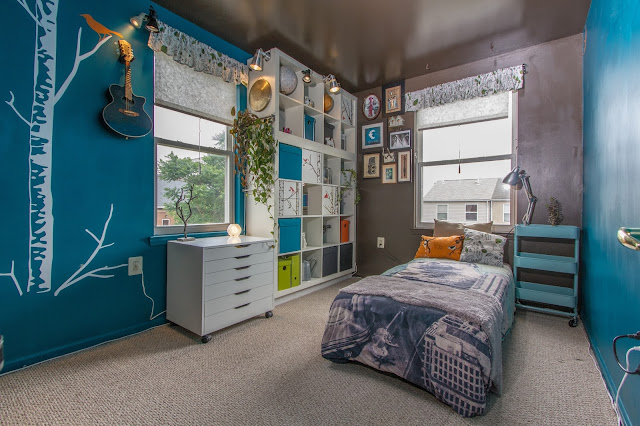 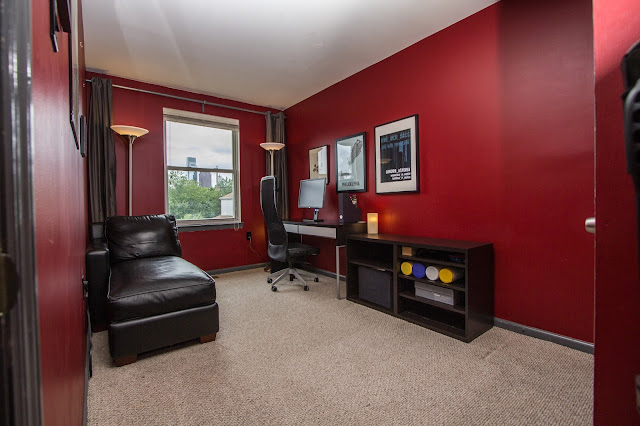 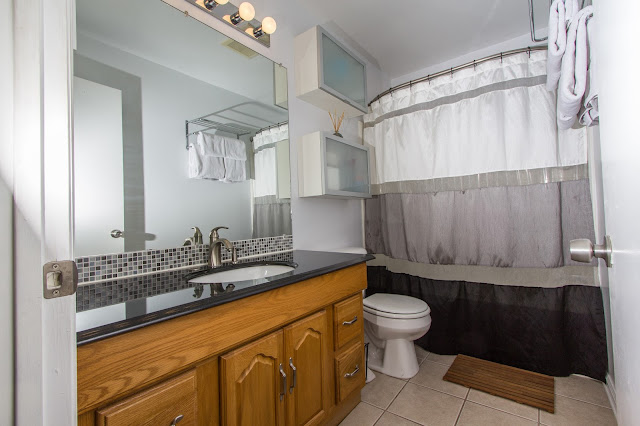 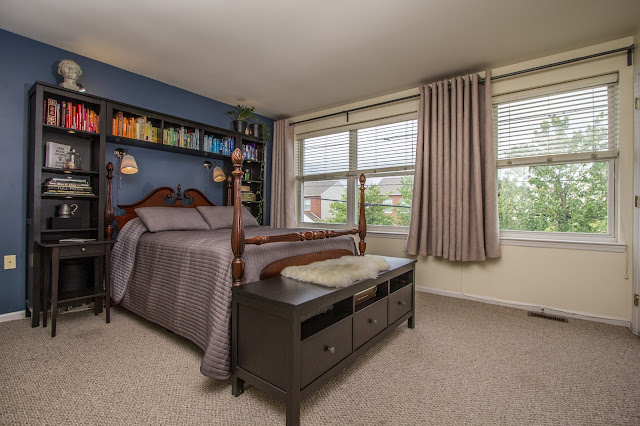 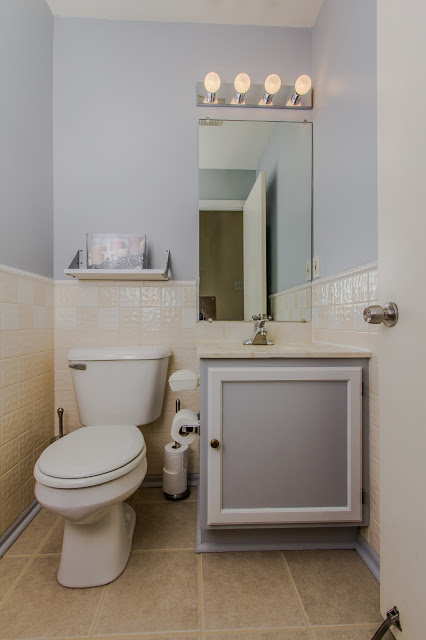 Assuming all goes well, in the next couple of weeks, our house will change hands, we'll move into our Downingtown house, the mortgage will be paid in full, and I can start looking at applying for financing again, this time with zero debt and robust FICO scores. Then begins the bidding process for the first stage of construction. Then construction itself. Then we'll start working on finishing. Then we'll move into our apartment. Then we'll renovate/finish the theater space. Then we'll open the theater, hopefully sometime in 2016.